Editor’s Note: From now on, Monday posts will focus on discipleship, beginning with this series by Reese Hammond on the biblical basics of disciplemaking. You might consider taking your ministry’s leadership team through these posts each week as a point of discussion and a way to keep all of you making disciples in dynamic, effective, and biblical ways.

Much has been said about what it means to be and make disciples. At the very minimum, it is describing the process through which disciples are made. We get the concept of discipleship, or disciple-making, from the Great Commission itself in Matthew 28:18-20. The phrase ‘make disciples’ is actually one word that describes the verbal form of Mathetes, which literally means to be a student or learner. This is the most basic idea when it comes to what we are trying to make when it comes to the process of discipleship.

Because of this, making-disciples is not only verbal in its use but in its very essence. It is something we do, it something that is to be accomplished, and all of it from the command of Christ. Therefore, we are all called to accomplish the process of making all people (literally, ethne, or people groups) students of Jesus, who, according to Matthew 28:20, are to observe/keep all that He has commanded.

"Making-disciples is not only verbal in its use but in its very essence. It is something we do, it something that is to be accomplished, and all of it from the command of Christ." @reesehammond Biblical Basics of Making Disciples… Click To Tweet

This brings us to the crux of this new article series we are launching on Mondays in October focused on the biblical basics of making disciples. If we know the calling and command of Christ to disciple-make, and if we know what we are to make, i.e. disciples, then there must be biblical truth that should show us how to do that. I don’t believe I’m imposing on the Word an unnecessary requirement, for it makes perfect sense for God to not only give the command but to give us what is necessary to keep it. And here is where I will truly begin to lay out for us the means through which disciple-making actually happens.

Looking to Scripture to Understand Discipleship

For most Christians in the pew, “discipleship” is a word that is frequently heard but rarely understood. I say this because the hundreds of students and church members that I’ve personally taught in my ministry experience have had little to no biblical understanding of what true discipleship looks like. They know they are supposed to make disciples. Many even know Matthew 28:18-20 by memory. But for all intents and purposes, they cannot not define, describe, or didactically reproduce biblical discipleship. They simply don’t know how to do it!

(Now, to the reader, this statement seems to be assuming that there is a true form of what biblical discipleship is, and with a resounding amen, I say, “yes, there is!”. The key, however, is to understand where to start.)

When we speak of making disciples, or any other biblical truth, we must always go first to the key texts of Scripture to draw out what God’s Word is revealing to us. In order to best understand what it means to make disciples, we must understand first the basic biblical picture of what disciple-making is. The best place to start is with the clearest texts.

After looking at those, we move through the less clear texts that may not directly reference the disciplemaking but support or help explain the concept. This is what we will do in this article series. I want to take you through the most primary texts of Scripture that lay out the most basic and holistic understanding of discipleship. Basically, I want to show you from Scripture what it is and how to do it.

Discipleship as a Holistic Framework

In addition to laying out the most efficient Scriptural evidence for the process of discipleship, I want to fulfill the title of this series. I want to show you, from my context as a Collegiate Missionary, what front-line disciple-making looks like in a ministry context that literally handles every worldview and belief system under the sun. I want to bring you to the Scriptures to show you how discipleship must never be compartmentalized but should be seen as a truly holistic framework. We may be able to describe the parts of the whole in regard to our topic, but the nature of true, biblical discipleship is seen ultimately as a holistic way of life. And we must see that this way of life reveals itself primarily through who we are in Christ and what He has called us to do.

Therefore, the most important application we must receive from this article series is that what we are to do at the most basic level must first be drawn from Scripture and Scripture alone, and second, that true, biblical disciple-making is a reformation of your entire life. To bolster this point, Robby Gallaty speaks of this necessary reformation in Rediscovering Discipleship when he says this:

My prayer is that this article series will help God’s people do exactly this, whether your context is college ministry, like mine, or something else entirely. 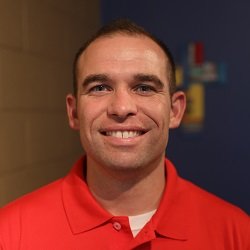 Reese is the Campus Missionary for Lighthouse Campus Ministry at Southeast Missouri State University. He became a Christian his senior year of college at Northwest Missouri State, where he then served on staff before taking the position at SEMO in 2018. He is passionate about evangelism and equipping students to share their faith. Reese enjoys reading, games, and being outdoors. He has been married to his wife, Lisa, since 2014. They have three young sons.
PrevPreviousConcluding Our Series on Mental Health
Next10 Ways to Appreciate Your PastorNext