College Ministers, You Can Overcome the Battle of Discouragement

College Ministers, You Can Overcome the Battle of Discouragement

Editor’s Note: Welcome back! 2023 is officially underway, and if you’re in college ministry or a college student, a new semester is about to begin. You might be raring and ready to go, excited to see what God has in store this spring. You might feel refreshed and rejuvenated after the holiday break. Or you might be fighting through a dark tunnel of exhaustion, mental and emotional fatigue, and discouragement. If the latter is you, this article is especially for you. Like the long dark days of winter, the months of January and February can feel particularly long and dark in the world of college ministry. Start your year off with a reminder that you can overcome the battle of discouragement!

The Struggle is Real

Being in ministry is a beautiful experience, but it’s often an experience plagued with pain, suffering, loneliness, and discouragement. You are probably thinking that’s a weird way to describe a beautiful experience, but not to me. The most treasured stories ever written are filled with those things. As a case in point, the wildly popular Nicholas Sparks books (and movies) are heartbreaking before they’re heartwarming.

The struggles don’t always feel beautiful or adventurous when you are the one experiencing them, however. Some seasons of ministry are like an invigorating hike through an orchard with luscious fruit dangling all around you. But usually the journey to those fields of growth involves a treacherous trek through the desolate valley of discouragement. This valley can seem long, laden with hard work, and lacking in fruit. You might constantly question…

Am I doing what God wants me to do?

Am I doing enough? Am I doing too much? Am I enough?

Why aren’t they responding?

Am I doing something wrong?

Those questions often plague us even more during breaks, when temporary ministry slowdown gives us time to reflect and evaluate. This can be not only discouraging but anxiety inducing.

The Struggle Can Be Overcome

How do we battle this overwhelming feeling of discouragement within our ministries and in our personal walks with Jesus? As someone who has been in ministry half her life and has traveled through many a dark valley, here is what the Lord has taught me in these seasons to keep moving forward.

Growth doesn’t come without tilling the ground, planting the seeds, watering the plants and having faith that God will grow the plant. Growth requires sacrifice, consistency and trust. The season you are in is necessary for the growth of your ministry. You don’t have to love the season, but you can be at peace knowing that you don’t work in vain. Your faithfulness can be fueled by your faith that God is at work.

Faithful is more fruitful than flashy.

Jesus’s faithful followers stuck with Him even when He wasn’t healing the blind or raising the dead. Jesus’s faithful disciples stick with Him even after the crowds left. After Jesus made a very controversial statement in John 6 about drinking his blood and eating His flesh, many who were following Jesus left. He turned to his disciples and said, “You don’t want to leave too, do you?” The ever passionate disciple, Peter, answered him, “Lord, to whom shall we go? You have the words of eternal life”(see John 6:67- 68 ).

The disciples (who were far from perfect) did stay faithful, even when they later faced severe persecution even unto death. But this faithfulness yielded the launch and exponential growth of the church (read the book of Acts). Being faithful produces more overall lasting growth then flash-in-the-pan events ever will. Stay faithful to what God has called you to, and trust His process over your own.

Discouragement is distracting, but it must be dealt with.

Discouragement is one of the enemy’s tactics to distract us so that he can disable us. But ignoring the discouragement isn’t the same as dealing with it. Confront and process those feelings. The goal is to move through them so that you can hear what God has to say. Take time to dig into your relationship with Jesus. Allow Him to do a work in you so that you can continue to do the work He has called you to. Talk to someone you trust who can offer a word of insight, exhortation, or encouragement. They can pray with you and give you some needed grace in this season.

"Take time to dig into your relationship with Jesus. Allow Him to do a work in you so that you can continue to do the work He has called you to." -Christina Boatright #collegiatedisciplemaker College Ministers, You Can Overcome the… Click To Tweet

Grace is greater than guilt.

Be gracious with yourself as you would be with others battling the same feelings. We often become so hard on ourselves when things aren’t going the way we hoped they would go, but guilt only adds fuel to the destructive fire of discouragement. God’s grace is greater than whatever guilt you feel. Remember that this is God’s ministry, not yours. He can take it any direction He wants to because He knows better than we do. Instead of beating the drum of self-criticism, beat the drum of God’s persistent grace in your life and ministry.

God’s success is strange to the world.

God’s definition of success looks nothing like the world’s or our own. What God sees as a successful ministry may look like failure to the world. The Messiah hanging on a cross certainly didn’t seem like a successful fulfillment of generations of prophecy. And Jesus literally had 11 guys and a handful of women left in His corner at the cross. By many church standards today, that would be considered as a failure. But those few literally turned the world upside down, changing history forever, because they were clay in the hands of a very capable potter. Measuring your success by what the humans think is successful will only lead to either discouragement or pride. Instead, ask Him to help you see your ministry through His eyes.

You can only control you.

Often the discouragement we feel is over things we have no control over. We can’t control outcomes or other people’s decisions. Yet we take it upon our shoulders when things don’t go the way we expect, or people suddenly stop coming, or the person we’ve been discipling turns their back on the Lord. You can’t control those outcomes or those decisions. Pray for those situations. Reach out to those people. Evaluate what you can do differently. Be obedient when God asks you to make a change. But let go of any form of control you think you have, and accept the things you have no power to change.

Failing doesn’t mean you are a failure.

Maybe everything did fall apart. Maybe you did make a mistake that caused harm. Maybe a plan didn’t pan out, and it was your fault. Just because something failed doesn’t mean you are a failure. What you do is not who you are; who you are has been eternally secured for you in Christ. When you fail or something in your ministry fails, don’t let it define you; let it inform you. Learn from it, and take what you’ve learned into the next opportunity. Learning and growth involve failure way more than success. Most innovation came about from many failed attempts to figure something out. Be creative, take chances, allow yourself to fail, and allow God to teach you and grow you with each one.

The Struggle Will Produce Fruit

With every new day is a new opportunity to be faithful to what God has given you. Discouragement is a tool our enemy uses to distract us from all the growth that God is doing, and ultimately from worship of God. Though the discouragement may seem heavy now, do not lose heart. Press on, for there is fruit on the other side of this valley—and probably in the midst of it, too. As Galatians 6:9 says “Let’s not become discouraged in doing good, for in due time we will reap, if we do not become weary.” 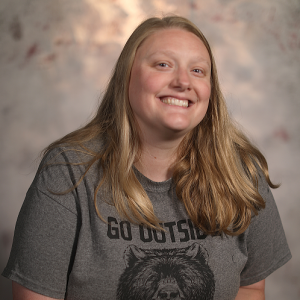 Christina is a Campus Missionary with the BSU at North Central Missouri College in Trenton, MO, where she has served since 2011. She is passionate about seeing disciples made and lives changed through the power of Jesus Christ. She is a Star Wars fanatic, and she enjoys reading and traveling.
PrevPreviousNavigating Controversial Topics in an Eggshell World
NextGen Z Ministry: Meaning is the Answer for FOBONext